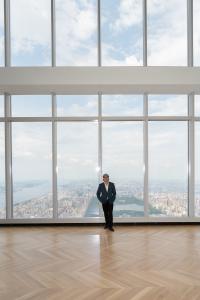 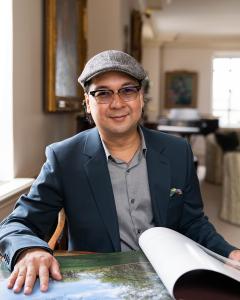 It is an approach that has solidified his involvement with ultra-high end properties such as the newly listed triplex penthouse at 217 West 57th Street, which is listed at $250 million.

“Luxury is lifestyle,” says Loy, a 30-year industry veteran, who made headlines when he left Corcoran’s top team to lead Serhant’s “Signature” division, which handles the firm’s most exclusive properties. “So it’s important to create a unique brand identity for each property that tells a story about the specific lifestyle it offers.”

To create that narrative, he works with his team to design a one-off “identity” for a listing or a building, where everything from the fonts, color schemes, background imagery, custom websites, property tours, editorial films, and email look-and-feel are dreamed up.

Instead of blasting a property across social media platforms, they consider where that property belongs. Some properties might shine on TikTok, while some belong exclusively on Instagram. Others deserve more refined exposure in luxury broadcast, print or digital media — think specialty publications that cater to art, private jets, yachting, fashion and jewelry scenes.

Moreover, they do not take the usual canned listing photos you see on real estate portals. They style the property like a cover model and bring it to life with video, music, art direction, and people.

“For any luxury product, packaging is everything,” he says. “We do not just create for the sake of views. We envision the parties who make the deal, and reverse engineer our marketing to bring that into fruition.”

Taking a targeted approach and taking the time to tell a story about a property, Carlos says, creates “drama, depth, narrative richness,” and even sometimes “funky, cute humor.” The cherry on the top?

“For each of our Signature listings, we create a custom book,” says Carlos, who studied journalism at New York University and runs a lifestyle magazine with a global following. “It’s painstaking. The whole process is, but it's the only way that you can express the level of luxury that a property offers to a buyer, in much the same way you differentiate ready to wear from haute couture, or in-season from last season.”

It’s a process that translates a media following into actual business, he says. But more importantly storytelling actually increases a property’s value.

“It may not look like it from the outside, but a lot of New York’s best properties have sold or are selling for far less than they should,” Carlos says, who is currently listing a $29.5 million townhouse at 7 Sutton Square and $25 million penthouse at 993 Fifth Avenue. “That’s because a lot of brokers push their clients to settle for less…just get it out there and hope for the best. But the last three deals I closed have all broken city records. That’s the power of an editorial approach to real estate. From cave men drawings to today’s social media, we’re constantly reminded that storytelling is essential in communicating our idea of home.”

About: Loy Carlos
Loy Carlos is an entrepreneur, mentor, and industry thought-leader who has been advising clients and partners on the intricacies of real estate for more than 30 years. As the head of SERHANT. Signature, Loy leads a team of property experts that specialize in the high-end luxury market.

Loy began his career in 1989. He served as the Regional Director of one of the most prominent and oldest real estate firms in New York and later as Executive Vice President/Director of Sales and Marketing at a major downtown brokerage and he led a top-ten-producing team to the number one ranking in the country.

Clients and co-brokers who have worked with Loy are quick to note his integrity and (sometimes brutal) honesty. They trust his knowledge and negotiation skills and they know that he will fiercely protect his clients’ interests. His transparency, positive energy, and calmness under pressure also stand out—especially during tense deals with several moving parts.

Loy has sold some of the most expensive apartments and townhouses in the city and has regularly posted record-breaking prices in various neighborhoods. His clients include permanent ambassadors and consulate generals, high-profile celebrities, investment bankers, advertising executives, executives of Fortune 500 companies, and presidents and board of director members of various chambers of commerce and other professional organizations.

Loy founded and is the Editor in Chief of Classiques Modernes Lifestyle & Estates, a lifestyle publication that focuses on emerging artists and creatives, not-for-profits and charitable causes, connecting luxury real estate with travel, fashion, music, art, architecture, and culture. The magazine enjoys a global readership. Loy has also been featured on CBS News, in The New York Times, The Wall Street Journal, New York Post, Brazilian Globo-TV and multiple other broadcast and print media for his real estate, business, and marketing expertise.

A year round resident of New York, Loy currently splits his time between Williamsburg, Brooklyn and the North Shore on Long Island. His interests include photography, language, painting, fashion, design, music, dance, and writing. He visits a museum every week for inspiration, and he loves to travel and experience other cultures.