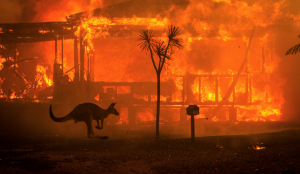 Kangaroo populations were decimated by the wildfires in Australia. Must they also be killed for shoes?

Synthetic soccer cleats are readily available and easily rival or outperform those made from the skins of kangaroos. There’s no reason to kill two million kangaroos on the other side of the planet.”
— Wayne Pacelle, president, Center for a Humane Economy
HARTFORD, CONNECTICUT, UNITED STATES, January 24, 2023 /EINPresswire.com/ -- The Center for a Humane Economy applauded State Representative David Michel, D- Stamford, for introducing legislation to stop Nike and other athletic shoe companies from sourcing kangaroo skins for soccer cleat models. His bill comes just as similar legislation has been introduced in Oregon, where Nike is based, and also drawing praise from animal welfare and wildlife advocates.

California, the largest soccer market in the United States, already bans trade in kangaroo parts, forbidding Nike, Adidas and other brands from selling shoe models made from kangaroos. In Connecticut, H.B. 5113, the Kangaroo Protection Act, would amend state statutes pertaining to commerce to “prohibit the sale, barter and offering for sale or barter of any dead kangaroo or product made from dead kangaroos.” The bill has been referred to the Joint Committee on Commerce.

“Synthetic soccer cleats are readily available and easily rival or outperform those made from the skins of kangaroos,” says Wayne Pacelle, president of Animal Wellness Action and the Center for a Humane Economy and a native of New Haven. “There’s no reason to kill two million kangaroos on the other side of the planet for soccer cleats that are already made with other fabrics and in wide use. The Center counted up the goals scored at the World Cup and determined the shoe models the players used. There were 172 goals scored in last year’s World Cup, with 164 coming from players wearing synthetic shoes or conventional leather (though synthetics dominated).

Each year, commercial shooters kill 2 million wild kangaroos in night-time attacks on the animals. It is estimated that more than 500,000 joeys, who are in the pouches of at the feet of their slain mothers, perish in the process. An estimated 70 percent of all kangaroo skins sold are used to make soccer cleats.

“Senator Michel is working to demonstrate that Connecticut can be a model when it comes to ethical commerce and benefit people, animals and the environment,” said Natasha Dolezal, deputy director of campaigns for the Center for a Humane Economy. “We are grateful to Rep. David Michel for taking on this fight and working to halt the commercial slaughter of iconic wildlife.”

“Nike and other shoe companies know that synthetic shoes sell far better than kangaroo-based shoes, but the companies persist in offering these shoes and at the same time tout their supposed animal-welfare and environmentally friendly policies,” said Jo-Anne Basile, executive director of Connecticut Votes for Animals, who worked with Rep. Michel on the bill introduction. “Commercial exploitation of the killing of millions of kangaroos, including joeys in their mothers’ pouches, is wasteful, inhumane, and a breach of the values of most Connecticuters.”

In 2021, U.S. Reps. Salud Carbajal, D-Calif., and Brian Fitzpatrick, R-Pa., introduced the Kangaroo Protection Act, which would forbid the sale of kangaroo parts in the United States. The Center for a Humane Economy and its partners are working to see that California’s law is properly enforced, and it makes sense for Connecticut to follow, as the state’s passion for the sport has grown, especially in the past few years with the founding of Hartford Athletic, the American professional soccer team based in Hartford.

Nike, Adidas, Mizuno, and other athletic wear companies use kangaroo skins only for some models of soccer cleats and not at all for running, football, golf, tennis, or other sports shoes.

ABOUT
The Center for a Humane Economy is a Washington, D.C.-based 501(c)(3) whose mission is to help animals by helping forge a more humane economic order. The first organization of its kind in the animal protection movement, the Center encourages businesses to honor their social responsibilities in a culture where consumers, investors, and other key stakeholders abhor cruelty and the degradation of the environment and embrace innovation as a means of eliminating both. The Center believes helping animals helps us all.

Animal Wellness Action is a Washington, D.C.-based 501(c)(4) whose mission is to help animals by promoting laws and regulations at federal, state and local levels that forbid cruelty. The group champions causes that alleviate the suffering of companion animals, farm animals, and wildlife, and it advocates against dogfighting and cockfighting and other forms of malicious cruelty. It also confronts factory farming and other systemic forms of animal exploitation. To prevent cruelty, Animal Wellness Action promotes enacting good public policies and monitors the enforcement of those in place. To enact good laws, the group believes citizens must elect good lawmakers, and it helps educate voters on which candidates care about animal issues as well as those who are hostile to them. Animal Wellness Action believes helping animals helps us all.

WAYNE PACELLE
Center For A Humane Economy
+1 202-420-0446
email us here
Visit us on social media:
Facebook
Twitter
Other